We visited Gibraltar in the summer of 2019 when we were living in Marbella, in Andalusia, Southern Spain.

We left our home early in the morning and reached La Línea de la Concepción, a Spanish city in the Province of Capiz (Andalusia) on the north of Gibraltar–Spain border, in less than a-hour drive.

We parked our car at Parking Santa Bárbara at Avenida Príncipe de Asturias, less than a kilometre away by foot from the border. A pay parking we booked the night before just to be sure not to have to struggle too much to find a spot for our car, having read that entering Gibraltar without your car is the most recommendable option to avoid queues at the border.

Then, we approached the border on foot and with our passport at hand, as Gibraltar is not part of the EU. It does, in fact, belong politically part of the United Kingdom, even though geographically it is part of the Iberian Peninsula. And because of that, as EU citizens, we needed to bring our passport and show it to the border authorities to enter Gibraltar.

That said, let’s buckle up and let’s start this new adventure with no further ado.

After the border control, we followed Winston Churchill Avenue, crossing the airstrip of Gibraltar Airport and heading for the city centre. After passing through the Landport Tunnel, we reached Grand Casemates Square with dozens of bars and restaurants overlooking it. We continued onto Main Street, the heart of the city, with tons of shops. And, after a nice stroll along Gibraltar city centre, we reached the cable cars at Red Sands Road, the easiest way to get to the top of Gibraltar, also known as the Rock of Gibraltar, a big chunk of limestone standing at tall 426 m (1,398 ft) from the sea, in just 6 minutes. At the top, as well as stunning vistas, there are over 200 Barbary macaques, which are the only population of monkeys in Europe.

Alternatively, if you want to reach the top without taking the cable car, you can do it on foot via the Mediterranean Steps. This 0.86-mile hike begins at the Jew’s Gate and ends at the O’Hara’s Battery, which is the highest point. Be warned, the steps are crazy steep so you’ll probably be able to skip leg day for a month at the gym! It’s challenging, but the spectacular views are worth it. If you’re not a big hiker, then I’d recommend the cable car because you’ll be a lot less sweaty and have a lot more time for all the other significant sites Gibraltar offers. 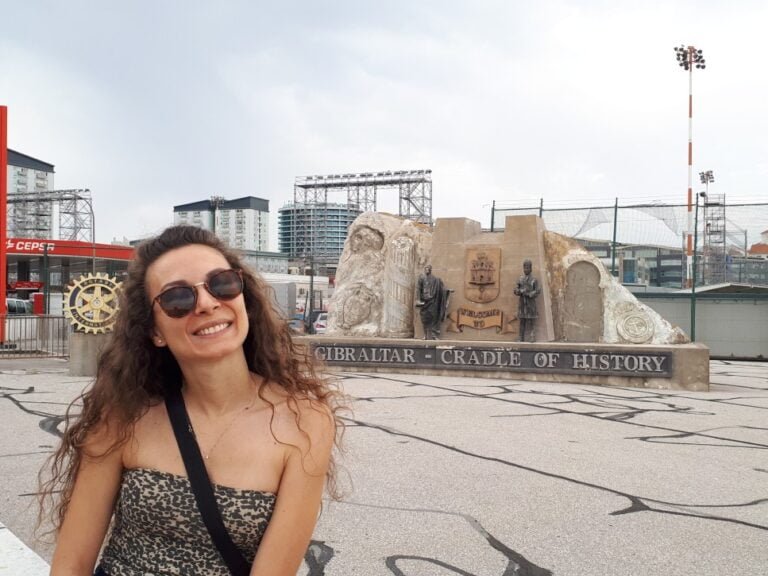 A nature reserve, which is home to Barbary macaques that, as well as a labyrinthine network of tunnels, covers most of the Rock’s upper area, attract many tourists each year.

Besides, the Rock of Gibraltar is one of the two traditional Pillars of Hercules, known to the Romans as Mons Calpe, the other pillar being Mons Abila, either Monte Hacho or Jebel Musa on the African side of the Strait. According to ancient myths fostered by the Greeks and the Phoenicians, and later perpetuated by the Romans, the two points marked the limit to the known world; although the Phoenicians had sailed beyond this point into the Atlantic, both northward and southward.

When you enter the National Park, you will see the macaques pretty much everywhere, even though on the top there is a designated place called “the Apes’ den” and we mostly found there them, not too far from the middle cable car station.

And there are so many monkeys that it’s really easy to take wonderful pictures and have some fantastic interactions with them. You mustn’t feed them, touch them, or get too close. These are wild animals but the little creatures are clever and they will pose for you, anyway.

We normally find this kind of monkey in North Africa, but their presence in Gibraltar probably dates from the early days of the British garrison when it is presumed that they were imported, inevitably finding the rough limestone cliffs and scrub vegetation a congenial habitat. Many legends have grown up around them. One is that they travelled from their native Morocco via a subterranean tunnel starting at St Michael’s Cave, leading down underneath the Strait of Gibraltar.

Another legend claims that, should the macaques ever disappear, the British will leave Gibraltar. During the last war, natural causes had diminished the macaque numbers alarmingly. Fortunately, Sir Winston Churchill took a personal interest, and they imported additional animals from Morocco.

The Windsor Suspension Bridge at Royal Anglian Way is another tourist attraction, not for the faint-hearted. This spectacular feat of engineering is 71 metres/233 feet high, across a 50-metre/160-foot-deep gorge affording visitors magnificent views of across the strait, bay and city.

One of the most impressive features of Gibraltar is St. Michael’s Caves. Over 300m above sea level, water seeping slowly through the rock created this series of limestone chambers and tunnels that were long believed to be bottomless. This probably gave birth to the story that a subterranean passage linked the Rock of Gibraltar to Africa under the Strait of Gibraltar, said to be used by the famous macaques to come to Gibraltar.

The caves were originally used to defend Gibraltar from their attackers, the Moors, and the Spanish. They also prepared the cave to be used as a military hospital during WWII, but it was never actually used for this.

Nowadays, the caves are just a magnificent spot to explore and the setting of the occasional concert. Yep, the cave has outstanding acoustics, so there will be a concert inside now and again in the 600 person auditorium.

Following Queen’s Road, you will find the monument to the world-famous Pillars of Hercules, the Ancient Greek god known for his exceptional strength.

According to mythology, one of his incredible feats while performing the Twelve Labours was to smash through a mountain range connecting Europe and Africa. This created the Strait of Gibraltar, a 36-mile (58-kilometre)-long water passage between the Atlantic Ocean and the Mediterranean Sea. They call promontories in both Morocco and Gibraltar the Pillars of Hercules. People believed the world ended with them.

This monument represents the Northern Pillars of the Strait.

On the opposite side of the Rock compared to the Pillars, you will find the entrance to the worth-exploring WW II Tunnels, 55 km/ 34 mi of the rock excavated to provide space for military equipment during the war and as a secure site to protect troops.

Gibraltar was an important and strategic land in that period, as it was the place where the ally ships and vessels supply themselves.

With the entry of Italy into the War, and a powerful Germany dominating Europe, the strategic importance of Gibraltar grew. The problem of storage was urgent; space became even more valuable; stores, food, and equipment had to be built up and protected, and it required siege accommodation for the troops. A tunnel system would meet these needs and would give full protection from the then known types of air attack, as well as from sea and land bombardment.

At the start of the war, they evacuated the civilian population and increased the garrison in size. They excavated many new tunnels to create accommodation for the expanded garrison and to store enormous quantities of food, equipment, and ammunition.

Within the tunnels, there was also an underground telephone exchange, a power-generating station, a water distillation plant, a hospital, a bakery, ammunition magazines and a vehicle maintenance workshop.

8. The Ruins of A Moorish Castle

As part of Andalusia, the Moorish, a population coming from Northern Africa that established itself in southern Spain for over 800 years, dominated Gibraltar.

During their domination over Andalusia, the Moorish made up a lot of buildings, such as castles, gates, walls, and towers. The Moorish Castle Complex, dating back to the 11th century, is one such example.

The fortifications on and around the site of the Moorish Castle were first built in 1160, or earlier. These were, however, destroyed when the Spanish re-conquered Gibraltar from 1309 to 1333. The “Tower of Homage”, its major feature, dominates the hillside and the landward approach to Gibraltar. It proudly displays the battle scars inflicted during 10 sieges. Here, a Spanish governor held out for five months against the Duke of Medina Sidonia, who took Gibraltar from his sovereign, Queen Isabel of Spain. In 1540, hundreds of people found safety inside the castle when Turkish pirates ransacked Gibraltar. The lower castle formerly stretched to Casemates Square, the Grand Battery area and the Old Mole. It is interesting to note that the courtyard of the Moorish Castle served as a prison until 2010.

On the top of the Castle still has the British flag like Admiral George Rooke put up in 1704 when Gibraltar firstly became under the British Reign.

On the other side of the Rock, compared to the WW II Tunnels and the Moorish Castle, there are the oldest underground tunnels dug during the 1779–83 Great Siege of Gibraltar.

At that time, French and Spanish forces had hoped to take advantage of the weakened position of the British, already busy with the American War of Independence. As a response, in 1782 the British dug a defence system into the Rock using nothing else but sledgehammers, crowbars and their bare hands, eventually reaching “The Notch”, a protruding projection on the northern face of the mountain where they mounted their guns to fight back the attackers.

Work did not stop with the end of the Siege, but instead of continuing straight towards the ‘Notch’, a tunnel was driven downwards and a large chamber opened under the ‘Notch’ called St. George’s Hall, where a battery of seven guns was installed.

Visiting the tunnels, you learn a great deal about the history of Gibraltar as a military outpost during several conflicts, including WWII. You can peek through the ventilation holes onto the Straight and the Spanish mainland, and several man-sized models are showing the action within the tunnels during the time of war.

At the end of the Great Siege in 1783, the defeated Commander of the French and Spanish troops, the Duc de Crillon, on being shown the fortifications that had led to the defeat of his troops, commented “These works are worthy of the Romans”. This comment highlights the ingenuity of those men who, against all odds, endured the onslaught of the advancing forces and could still devise a unique system of defence that afforded them victory.

After that, we walked back to Gibraltar city centre, and from there to La Línea de la Concepción, and our car in the parking.

After a day spent in Gibraltar, we could say that what impressed us the most was the Rock, a truly must-see place. Its flora and fauna, the stunning St Michael’s Caves, and the tunnels really amazed us. Not to mention the astonishing view over the Moroccan coast you can enjoy from almost any of its many viewpoints. What a great way to enjoy a summer day!

P. S. Subscribe to my newsletter to make sure you don’t miss any of my next travel posts.